These factors raise red flags for insurers and increase costs for homeowners. People buy insurance to minimize their risk and make themselves whole should a covered loss occur. What many may not understand is that a number of factors can cause premiums to skyrocket before a covered peril even occurs. Adjusters and claims managers handling the ensuing claims also need to be aware of these possible red flags and their impact on any settlements.

An up-to-date home inventory complete with photos can be a major asset to any claim. I have always encouraged Homeowners to take a digital tour of every room to record furniture, electronics, antiques, works of art, family heirlooms and other irreplaceable items in the home. After a fire or major flood, it can be difficult to identify valuable items or their pre-loss condition.

The photos and a detailed inventory should be stored off-site in a safe deposit box or other secure location and copies provided to my agency to ensure they are added to the appropriate policy. Keeping them on the computer at home won’t help if the computer is destroyed in a fire or stolen in a robbery.

A similar tour of the outside of the home can capture possible risks like trees near the house, foundation issues or possible roofing problems, as well as assets like copper gutters and other aftermarket finishes that add value to the home.

Here are 10 factors (not in any particular order) that can make a homeowner’s property a greater risk to insure. Not every dog is man’s best friend and some insurers don’t take kindly to all breeds. Owning a German shepherd, Great Dane, Siberian husky, Doberman, Rottweiler, Pit bull, Akita or any other dog that could be considered aggressive could raise insurance rates. “This isn’t only limited to dogs, as exotic animals such as tigers, monkeys and others may cause rates to be high, if you can even get insurance,” says insurance expert Chris Tidball.

Insurers will look to see if a homeowner has paid their bills on time and check credit scores. A lower number could result in higher premiums.

Just like in real estate, the location of the home really does matter. Owners of homes located in Tornado Alley, along coastal Florida (or any coast for that matter), in a hurricane-prone state or in an area known for sinkholes can expect to pay more for homeowners’ coverage. Although exercise is important, some exercise equipment can impact insurance rates. Trampolines result in approximately 92,000 hospital visits each year. Parents frequently are unaware that they cause spinal injuries, fractures and head injuries. Most injuries are not caused by children flying off the trampoline, but because one child lands on another when they are jumping or they try something silly like riding a bike and jumping. Doctors recommend that only one child at a time be on a trampoline with adequate supervision. This may cause what many kids and teens refer to as a “no fun zone”, but safety should always be the main concern 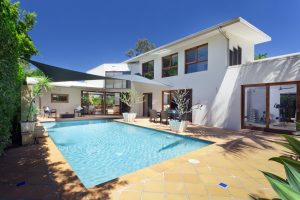 Another source of higher homeowner insurance rates involves swimming pools. According to Parents magazine, drowning takes more than 1,000 lives a year and more than half of these events take place in the children’s own home and one-third take place in the homes of friends and relatives. An in ground pool usually requires a fence around the yard, or an above ground pool usually requires a deck surround with a locking raised ladder. Diving boards and slides are also an underwriting issue with most companies. A pool in your yard can be considered an tempting invitation for neighborhood kids to jump in without permission, and You are still liable if anyone gets hurt on your property or drowns in your pool

Location also matters when it comes to fire stations. Living too far away from the local fire station or a fire hydrant will raise insurance rates. Of course, a neighbor’s pool could be a source of water in an emergency, as well as a nearby pond. Owners who don’t keep up with their home maintenance may see their rates raised or their homeowners insurance cancelled altogether. Leaky roofs, old hot water heaters, dripping pipes, balconies with no railings, cracked and uneven steps, porches and patios and poor water seals are just some of the items to watch out for. In 2012, 17.5% of the losses claimed were related to water damage and freezing pipes. Worn out roofs, damaged chimneys and rain gutters also raise concerns. Being ill-prepared for bad weather can also impact home owners insurance rates. “In some states such as Florida, a homeowner can have a qualified wind inspection that demonstrates the ability of the insured structure to withstand certain force winds, which can result in a discount,” explains Tidball. Insureds who make multiple claims may be viewed as a higher risk and charged accordingly. Damage from a burst pipe, a tree that lands on the roof, or a kitchen fire on the same property will raise a red flag and cause insurers to take a closer look.

“Living in a high crime area has been tied to an increase in certain types of claims, such as robbery,” says Tidball. “Rates will be assessed accordingly.” Approximately one in 190 insured homes have a property damage claim related to theft each year according to the I.I.I.

And, based on I.I.I. figures from 2011, rates for homeowners insurance are highest in Florida, Texas, Louisiana, Mississippi, and Oklahoma. Idaho, Oregon, Utah, Wisconsin and Washington have the lowest rates.

We Shop the Companies

So YOU Don’t Have To!